This afternoon we had our first, serious, hands down conversation. As a class we’ve had a lot of great conversations throughout the year, but I had shied away from a full on, student-led conversation. (I do regret that. There is much about this year I regret while also recognizing that, as I said to a friend tonight, getting through each day has been and is an accomplishment.) Recently I’ve overheard a lot of conversations among my third graders, during lunch or recess or before school, that suggest some very rigid ideas around gender roles. I wanted to encourage some conversation to explore our thoughts around what we believe females can or can’t do.

I opted to read Girl Running, stopping at various points for conversation. (I recorded it but haven’t watched it yet. I’ll be curious to see if my reflections and feelings about it remain the same after watching the video…) To kick us off, I told them this was a true story about a real person and read the first page.

Not surprisingly, multiple third graders raised their hands when I asked what they were thinking. I just waited a second and the talking got going. One girl, who always has strong opinions in brilliant ways, simply said, “It’s dumb!” There was much consensus about that. One student said, “It’s not okay. It was okay back then but it’s not okay now.” The kids didn’t run with that idea, but I filed it away to return to.

We continued reading about Bobbi Gibb, the first woman to run the Boston Marathon. 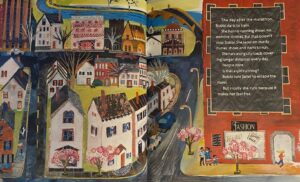 We stopped here to discuss why people might be staring at her, why it was odd to see a girl running.

We stopped again when Bobbi requests an application to run and is told no because, “We will not be able to send you an application. Women are not physiologically able to run twenty-six miles and furthermore the rules don’t allow it.”

My third graders had many thoughts on that one. They cited the book having said that Bobbi was running thirty to forty miles a day so how could they say she couldn’t run twenty-six? Said with great indignation.

By the time we finished her story (and I highly recommend this book, it’s exceptionally well done in telling this specific story, both in words and illustrations) we had explored, in our discussion, lots of thoughts around what women could and couldn’t do ‘back in the day’ as my students kept saying as well as their thoughts around what was and wasn’t fair and right.

Near the end, I returned to the idea that ‘it was okay then but it isn’t okay now’ and asked what they thought. There was definitely some reflection but the end result was the sense that it wasn’t okay then.

As our conversation was winding down, several students talked about laws or rules (they used those words interchangeably) that were not fair or right, always in the past. I said, “We are going to stop, for now, but I’ll leave you with a question. Several of you have said this rule wasn’t fair, it wasn’t right. Do you think there are rules or laws now that aren’t fair or right?”

I watched one kid’s eyes bug out as he processed that question. I did tell them they could turn to partners near them and talk about their thoughts on that question because it seemed mean to just transition to something new on that note!

Again, I may feel very differently about this when I watch/listen to the recording, hopefully later today. But right now, I’m so glad I prioritized this. Both the topic/book and the hands down, whole class conversation. There’s a lot we need to do differently to make this work (sitting in our desks, spaced around the room, all facing the front, wearing masks is not super conducive to hearing each other) and I’ll spend some time reflecting on that. But it was a great way to end this week. We only have five more weeks together. I intend for us to have some great conversations in that time.