We start every day with a morning meeting. After about the first month it is led by a student. That job changes every day so about once a month every kid gets to be Meeting Manager. The student picks and leads our greeting, calls on kids to share (they can share once every week to give everyone a chance), picks and leads our activity, and leads the reading of our morning message. Then I take over.

Our morning message does a lot of work. There is a word study aspect to it that usually carries over for two or three weeks, depending on need. The message either addresses something in our school or classroom or community or a historical event. Then there is an interactive piece the students complete during arrival and breakfast. The whole thing, from our greeting through to the pledge of allegiance and moment of silence (by law here in the commonwealth of Virginia) takes somewhere between 20 and 30 minutes. 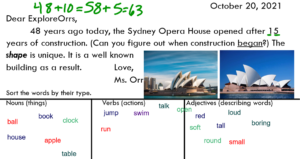 Yesterday we watched a video about the continents and it included points of interest on each one. The Sydney Opera House was one of those highlights (which was a nice bonus since that wasn’t something I planned).

Word study this week (and last week) is about the silent e. So we’ve spent a minute each day looking at those words and considering what they would sound like with or without a silent e. Mostly the kids have that down now that we’ve been doing it for a bit. We’ll see if it transfers to their reading and writing.

Obviously today we talked a bit about nouns, verbs, and adjectives. Not all the words got sorted before we started so we did the rest together. I taught the kids how to sign n, v, and a so that they could all share their thinking about each word at the same time.

We talked about when the Opera House construction started and one kid was able to figure that out pretty easily. So I challenged them and asked what year the Opera House opened. (I told them that the Opera House and I are the same age which peaked their interest.)

One student answered and said that it was 1983. I asked how she knew (just as I had done with the student who figured out when construction began).

She did all of that mentally. I was floored. I was sure we were going to have to work through it together because that’s a lot to hold on mentally.

The way morning meetings work in our classroom has evolved over the years. Sometimes I forget how much we do in that short time. I do love kicking off our days this way.