Over the years I have learned that there has to be a decent balance between the structure of your teaching (how things build on and connect to each other) and realistic logistics. This year that means that my students do something on their laptops during the last hour of the day on Fridays. We come back to our room from specials for one hour before dismissal. We eat a snack, because our grade level has the earliest lunch and many of my kiddos have long bus rides home (due to bus driver shortages, mostly) and then we have our science or social studies time. As I plan each week, I try to think about ways we can use our laptops for science or social studies on Fridays.

My third graders take their laptops home every weekend. But during the week, they leave them at school. They’re pretty heavy and my kids are eight. So we have a couple of desks against a wall with surge protectors and we make three stacks of laptops there. It is relatively space efficient and allows the laptops to charge. It is, however, a bit of a bottleneck every time we need to get them out or return them. So it’s helpful to be using them on Friday afternoons before packing them up, rather than scrambling to get them at dismissal time.

Today, after a week of testing, I sent my students to check out Zooborns. It was a hit. One little boy said to me, “Ms. Orr, I’m trying really hard not to cry because this video of a tiny parrot is just too cute.” My love for that kid increased ten-fold in that moment.

Most of my kids were obsessed with this video that they found here. It is of a giraffe giving birth. There were many ‘ewwwww’s and ‘gross’es’s, of course. I pointed out that there were plenty of videos and pictures on the site if that one didn’t fit their interests. I could have been talking to a wall. 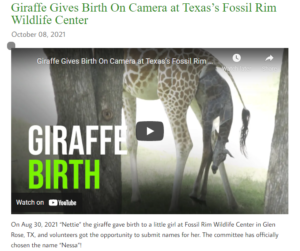 A screenshot shows why third graders might all have clicked on this video.

Now, it should be noted that we did three days of CogAT testing this week as well as completing an SEL screener. It’s been quite a week. Which is my excuse for how I responded when my students continued to watch the giraffes and continued to loudly respond about it.

I finally said, “You know you were born, right?”

One little boy (who happened to be celebrating his birthday today – of course) said, “That’s what I did?!?” quite loudly and in a supremely shocked voice. That’s when I thought, “Hmmmm…maybe that wasn’t what I should have said.” We’ll see if I hear from any families…