Today’s Washington Post has an article, What it’s like to learn online from inside a homeless shelter, that highlights the reality of online schooling for kids who are currently homeless. It’s worth a read. I’ve taught students who were living in homeless shelters and the challenges were significant before the pandemic. There is no question it is tough now, but it has certainly never been easy. It is just one more spotlight shining on the ways we, as a society, do not care for others. 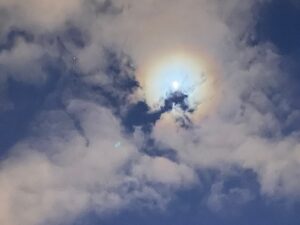 Somehow this picture that I took when we went to see the planetary conjunction a few weeks ago feels just right here.

I teach on a military post so my students come and go regularly. Since early September, I have had three students join our class and five students leave it. I want to share the story (with some details changed for privacy) of one of those students because it is important that we know the reality for many of the kids in our care.

This student, Jessica (not the student’s name, but so many of my kiddos are J names this year so I decided to stick with that) had not responded to anything before the year began. I had reached out to all of my families multiple times and had scheduled online meetings with almost all of them before the first day. A few I had reached out to let me know that they had moved. Not surprising in our community. This was the only family I hadn’t heard anything from at all. I figured I’d see if she showed up on the first day before taking any more steps. I was assuming the family had moved.

On the first day, no Jessica. I decided I’d call at lunchtime. Still assuming the family had moved. I called and her mom answered. When I introduced myself and explained why I was calling, I learned that they’d had to move out in the past month for medical reasons. They had nowhere to go so the kids (Jessica and her older sibling) were with grandparents in one state and the parents were with family in another state. They were looking for jobs and a new home in yet a fourth state. I was so shocked I was almost speechless. I think I said something about how hard that must be and to let me know if we could help.

All afternoon and evening I kept thinking about this family and about how insufficient my response had been. The next morning, the second day of school, I texted this mom. I said Jessica was welcome to come to class no matter where she was, if she had a device and wifi. Mom and I went back and forth a bit to figure out what that might look like. She said she’d talk with the grandparents. That was Wednesday.

Thursday the grandparents went out and bought a chromebook for Jessica. Friday morning her grandmother called me to ask if they could wait until Monday for her to start class as the grandfather had been up super late setting up the chromebook and they were feeling stressed. I said of course and offered to talk over the weekend to figure out the details.

On Sunday we chatted to make sure they had all the links and everything they needed in place. On Monday morning Jessica joined us. They live in a rural area without strong internet so they were using their cell phones to connect her chromebook. She was in class every day. She was excited and engaged and a delight to have.

I texted with her mom fairly regularly about her progress and their plans. One Monday, about six weeks later, she let me know that Jessica wouldn’t be in class that day as they were traveling. They were all four going to be together as they made arrangements to move into a new home. Jessica now attends her local school in a new state (not here, not near her grandparents, and not near the other family members who her parents stayed with). Even when they were first in the new house she was joining us for school until she could be registered and begin locally.

I am thrilled things have worked out for her and her family. I am still astounded by how hard it was for her to attend third grade for the first two months of the year. Just a note, her older sibling, in middle school, did not attend school in all that time. That student fell through the cracks for a number of reasons. How many kids are falling through the cracks? Even if it is only temporarily, it is not okay. It is in all of our best interests to care for the kids in our communities. More importantly, it is the right and humane thing to do.