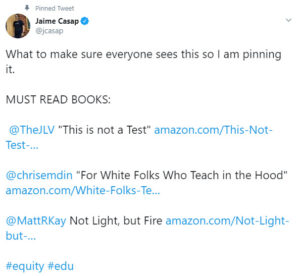 First off, I love all three of these books. I’ve read them all. They’re all books I have highly recommended to others and have gifted copies of to others. My copies are full of highlights and post it notes. There is no question that I think people should read these books.

Initially, this tweet was in response to a request for PD material on implicit bias/equity. Again, these are great books on those issues. Immediately I noticed that the list is three men. That was impossible for me not to see.

I couldn’t ignore it. And immediately both Jose and Chris, two of the men whose books were mentioned above, started sharing books by women that should be read.

The books suggested by Jose and Chris included:

All of that is interesting and an awesome collection of books – both the original three and the ones that were shared after I asked.

But it’s not my point here. Which is probably a concern about my skill as a writer because who takes this long to get to their point?

When I saw the original tweet I immediately thought, “Why are there only men on this list?” The lack of women was glaring. I wasn’t willing to ignore that. I had to push back.

As a woman I know I appreciate it when men push back at panels or recommended lists that are all male. It shouldn’t only be on women to do that work.

It shouldn’t only be on IBPOC to push back on panels and lists that are all white. White folks need to speak up but in order to do so we have to notice it. We have to recognize how often panels and lists are all or overwhelmingly white. It’s easy for us not to see it. Seeing it is a critical first step to actually working towards change.

Somewhat related is this thread from Kory Graham. Kory is an educator I greatly respect and this thread shows some of why. She shares here the ways in which she is still learning to do the work of anti-racism better, especially as a white woman. I’m grateful for this because I think one of the things that will help a lot of us do better is to see behind the curtains of others. We have to share, not just what we’re doing well, but our challenges and learning journey as models for others. Kory does that and, a critical piece, cites those who are helping her along as well.