It’s Pride Month and in the past several years I’ve gotten to know a surprising, to me, number of high schoolers and middle schoolers in the LGBTQ+ community. I’ve gotten to know these kids because they are friends with my own kids. Some of these young people have supportive families and friends and seem to be doing great. Others live in homes where they deny who they are or are denied it. Some are afraid to tell their families about themselves. They live pretending to fit the societal norm. 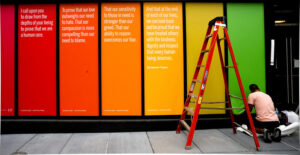 I don’t remember when I knew I was straight. I don’t remember when I knew I was cis-gender. I don’t have to know because it was what was expected and I didn’t have to think about it. I do know I had crushes on boys in elementary school. If a kid has a crush on someone of the same gender in elementary school, why do we question that? Why do we assume that crushes on people of the opposite gender (assuming a binary, which is quite an assumption) are totally normal and valid but crushes on someone of the same gender might just be a passing phase? Somehow we think kids can’t possibly be trusted to know who they are when it comes to gender and sexuality. At least, if who they are isn’t straight and cis-gender.

My first name is Jennifer. I share that first name with an astounding number of people about my same age. In fact, 10% of the girls (again, I’m making some serious assumptions about gender here because I’m not sure how to do better than that yet) in my 8th grade class were named Jennifer. Over the years of elementary, middle, and high school I tried on lots of different variations of Jennifer: Jenny, Jenni, Jen, Jenn, Ginger (my mom would call me that). I even tried out Jo, as my initials are J.O. I know I considered using Amy, my middle name, but I’m not sure I ever really used it. By adulthood I decided I really don’t care. I tend to introduce myself as Jennifer but I respond to just about any variation on my name. I appreciate that I was given the freedom to try on all those different options though. It was a part of trying to figure out who I was/am.

No one told me I couldn’t do it. No one said, “Your name is Jennifer. When you’re older you’ll understand that, even though you feel like experimenting right now. It won’t last.” (Although, when I was the student musical director for our school musical my junior year and they thanked me on closing night, calling me “Jen Orr,” my mother was appalled. She said it sounded like I was a kitchen appliance. The fact that jenorr is now my URL and twitter handle does show that her response to that initial experience didn’t have long term impact.)

I am aware that trying out versions of my name is not even close to the same as trying to live as a member of the LGBTQ+ community. There was no danger for me. My family and teachers accepted me, whatever name I opted to use. They might not have always remembered to use the name I wanted, but no one was trying to stop me or deny me being who I saw myself as being. I’m sure one of the arguments would have been that no one was harmed by my trying out different versions of Jennifer. Which is definitely true. Of course, no one is harmed by a young person being gay or gender fluid or bisexual either. Except maybe that young person who faces scorn, disdain, prejudice, and even violence.

A couple of years ago I read Mark Oshiro’s Anger is a Gift. Since reading it I have given it as a gift to multiple young people. The high schoolers in this book are a diverse crowd in every possible way. I realized, as I read it, that I had no trouble accepting the idea that this group of friends included kids from many different races and ethnicities. I spent sixteen years teaching classes exactly like that. The group also includes kids in many parts of the LGBTQ+ community. At first that was a bit hard for me to believe. When I started to think about my oldest, who was a freshman then, I realized that could be her group of friends (if they were far more white). I knew those kids. Their gender and sexuality are not, mostly, driving parts of the book. They are just who the kids (and their parents, for some) are. Race and police violence are far bigger issues in the book. Which means that right now, in Pride Month and in the midst of a massive Black Lives Matter movement, it’s a fitting book to read.