Yesterday was Veterans Day so many of the parents of my students had the day off, but we had school. A couple of my kiddos weren’t there. It turns out they both spent the day with their active duty parent. (Which impresses the heck out of me because if I could have a day at home while my children are at school I would be beyond thrilled.)

One of these kiddos often struggles to readjust to school on Monday and today was no exception. She and I worked through some serious frustrations and, on the whole, had a pretty good day. If a day that likely wore both of us out.

We left the library this afternoon, in a rush as we always do because checking out books is serious business and I hate to rush them through it. So I rush them out once they’re done. As we headed down the hallway I noticed my special friend go into the gym rather than follow our line. I took my class on to Think Tank and then headed back to the gym.

We often have three classes in the gym at the same time so it’s a busy place. I quickly found my kiddo on a tumbling mat with shoes off. I knelt down and told her she needed to put her shoes on because we don’t have P.E. today. I was fully prepared for anger and frustration. I was wrong. She put her shoes on and we walked out together. As we made our way to Think Tank I asked her about her day with her mom yesterday. I asked if it was hard to get used to being back in school. She said it is and that’s why she went to the gym, because she was thinking it was Monday. We have P.E. on Mondays. 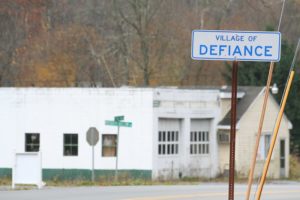 She headed quite willingly into Think Tank and I walked away to a meeting reflecting on how that had gone. It had been such a smooth transition from the gym and I had not anticipated that. As much as I hate to admit it, I think I was assuming she’d headed into the gym out of defiance. Not out of confusion.

By not tackling the situation as though she were being defiant I didn’t push her into that stance. It didn’t become a battle or a power struggle to get to Think Tank. I expected it to go that way. It was a treat to have it be so smooth.

I hate that my gut instinct is, far too often, to assume kids are being defiant. I can usually pause just long enough to not respond as if that is the case, thank goodness. Because most of the time kids aren’t.

It may have been a factor that our admin just shared this article, from Responsive Classroom, about responding to defiance in their weekly email to the staff. I don’t know how many of us needed to read it but it seems clear to me that I definitely did.