This weekend I managed to get to a soccer game and see a few of my students play. With only one game left in the season they are undefeated. They are doing so well, this 10 and under team, that they are often beating their opponents by more than five goals. 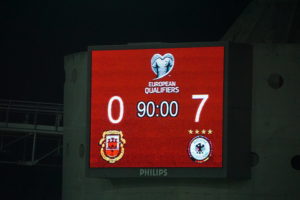 Some years ago I played on a co-ed softball team with some colleagues and others. I don’t remember the exact rule in that league (as I’m not sure it ever impacted one of our games) but there was a slaughter rule. If one team was up by a set number of runs after a set number of innings, the game ended. That was it.

For this 10 and under soccer league they handle ‘slaughters’ a little differently. Once a team is up by five goals, they pull a player off the field. The dominating teams plays down one player. After a set number of more goals, they pull another player and play down two. That way the kids still play a full game but it levels the field a bit rather than have young kids deal with losing by double digits.

I heard some parents grumbling that this regulation was teaching kids that if you’re really good or skilled you’ll get pulled out. That seems absurd for a few reasons. First of all, I doubt any coach is pulling their most skilled players from the field first. Second, I think there are plenty of messages kids will get from the policy before they get that message.

But it got me thinking about the concerns adults have about what decisions, policies, and regulations are teaching kids. We do need to think about this and do so deeply and critically. It’s a pretty constant focus of reflection for me to consider how my actions, expectations, and such are sending kids very clear messages. And often not the messages I want to be sending.