This morning we were in the final stages (at least I need to believe it’s the final stages) of sorting books in our classroom library. One of my precious little boys was super excited about the piles of books he was creating. He was so proud of his work. 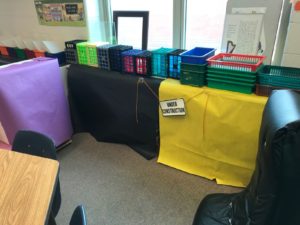 Our classroom library needs to NOT be under construction anymore.

Another student told him those piles wouldn’t work because we need more than just a few books in each basket (an idea I have to keep reiterating). She was right but he got super upset. He started crying and saying how he’d messed up and done it wrong. Of course, what he was doing wasn’t wrong. It was a first step. Every basket starts with a few books. If we find enough that go together, we make a basket. If not, we find a basket for those few books.

But he couldn’t hear me saying this. He was too upset. I kept repeating that he hadn’t done anything wrong, that this is exactly how we started every basket. Once he had calmed down enough to hear me I told him again that what he was doing was right. I also told him that it made me sad to see him be so unkind to himself. I told him how much I like him and how I don’t want anyone, him included, to be mean to him.

I can accept that I can’t be everything for everyone. I may not like it, but I can accept it. That I will fail sometimes is a given. In fact, I believe it’s often where the best growth happens, at least for me. However, lately I feel like I am failing a few kids because I am not showing them the patience, the care, and the love they need and deserve. I keep thinking about it. I keep being frustrated by it. I keep wanting to do better. And I keep failing.

This is the one place where failure is absolutely unacceptable to me. I am the adult in that classroom and if I am unable to rise above my own emotions and issues then I can’t possibly expect eight year olds to do so.

Over the next few days I’m going back to Lost at School. It’s time to try something new in the hopes of doing better by these kiddos.