Last weekend we saw What the Constitution Means to Me at the Kennedy Center. I had heard good things about it and was quite intrigued, without really knowing what to expect. That makes it feel strange to say it exceeded my expectations, but it did. By a long shot. It was an emotional roller coaster and intellectual journey. I have no interest or skill set for reviewing the show, but I will say it is definitely worth seeing if you have the opportunity.

At one point, a little beyond halfway through the show, Heidi Schreck, having told several stories of women who were abused by the men in their lives, says, “What does it mean if this document does not protect us from the violence of men?”

I grabbed a pen from my purse and, in the darkness of the theater in which I really couldn’t see what I was doing, I wrote that line down on the envelope that held our tickets. It hit me so hard and I was terrified I would forget it as the show continued. I had to hang on to it.

It had never occurred to me that I, as a woman, don’t really feel protected by the laws in our country. I had thought about this for people of color. For parents of Black boys who have to teach them how to respond to a police officer to minimize the chance that they’ll be harmed. (And for girls, but overwhelmingly for boys.) For brown folks who fear being deported. As a woman I hadn’t thought about the legal structures that harm me.

Even though I know I was raped at 16 and never reported it. (Didn’t tell anyone for nearly two years.) Why bother? It wouldn’t have resulted in anything and would have been hell for me. I’ve watched many women in my life face similar situations. Situations in which they don’t feel it is worth the trauma to try to get justice from the legal system. We see it play out in the media time and time again.

“What does it mean if this document does not protect us from the violence of men?”

Over the past couple of years I have been reading all of the books in Anne Perry‘s Charlotte and Thomas Pitt series and William Monk series. Both series are set in the late 1800s in London. Both series have prominent and strong female characters. Again and again as I read these books taking place 150 years ago I am struck by how little has changed for women and people of color. We have made progress. There is no question. But it is astounding how easy it is to see how far we have to go when we look to the past. The progress has been so slow and so small.

This past week, when Cokie Roberts died, I heard a lot of tributes to her on NPR. I was struck, not surprisingly, by this quote. 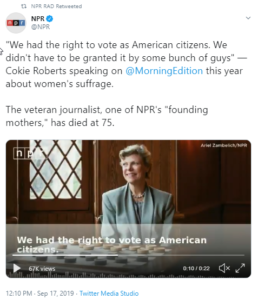 We did have the right. And yet…

So. “What does it mean if this document does not protect us from the violence of men?”

2 replies on “On The Constitution and Being a Woman”