I didn’t change my last name when I got married. At the time I justified it by saying that I had done quite a few harp gigs with my last name as well as subbing in my school district. I didn’t want to lose connections who might look for me with that last name. (And in the late 1990’s it wasn’t quite as easy to find someone if their name changed.) Totally reasonable things to say.

But not the real reason. Now, 20+ years later, I can admit that I just didn’t want to change my name. I felt like I needed to explain why but really, I just wanted to keep my name. My husband was fine with my decision. If he hadn’t been, that would have been a red flag for me.

More than five years later when our first child was born, we discussed the last name we would give that child. My last name doesn’t hyphenate well (Orr sounding just like or) and we also thought if people all hyphenate it gets a bit complicated for the next generation. My husband felt strongly about our children having his last name. I didn’t. They have his.

We didn’t know when we made that decision that both of our children would be daughters. Both of whom, not surprisingly, are feminists (like their parents). Both tend to use their last name and mine all the time. The fact that they don’t legally have both names doesn’t stop them. I find it both silly and heartening.

I read this article a while back and have been thinking of it ever since.

Now I can admit to something I wasn’t even aware of back then: I wanted my children to have my last name simply because I wanted it. I can feel a tinge of shame at the brazenness of this desire, but that emotion is followed quickly by a stronger one—anger.

I feel I should note that when our first daughter was a baby I explained that I had to work because we needed my salary (at the time it was equal or more than my husband’s so the argument was strong). Again, looking back, I realize if it was important to me to stay home with my baby we could have made it work. I didn’t want to stay home. But I didn’t feel I could say that. 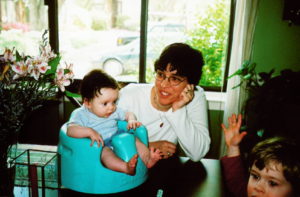 It never ceases to amaze me to realize how much societal expectations and norms impact my decisions and my thinking.