Yesterday my husband and I took our daughters (ages 16 and 12) up to Philadelphia to see the Marvel exhibit at the Franklin Institute. In the past few years both of our girls have become serious fans of Marvel. I knew the exhibit would include a lot about the original comics and how the Marvel universe and characters have evolved through the past 80 years, so I was somewhat concerned they would not enjoy it. My worry was needless. They might have gotten bored after a bit but the exhibit moved into many of the props and costumes from recent movies. There was much oohhing and aahhing. It was totally worth the trip.

This image was at a very early point in the exhibit. I was really struck by it. 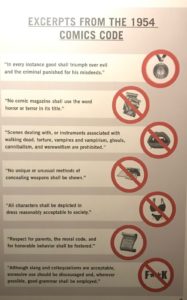 As one who has been teaching for more than twenty years and who spent time between college and teaching as a children’s specialist in a bookstore, I have often thought about how much better kids books are now than they were when I was younger. And even then I think they were better than when my parents were kids (at the time of this comics code).

Children’s books are more honest with kids now than they were in the past. Authors and publishing companies (at least to some extent) recognize the importance of not hiding difficult situations and ideas from kids. Books can help kids better understand the challenges in life.

Comics served much of this same purpose in the 40s and 50s. Superheros and crime fighters in comics introduced kids to aspects of their world that weren’t always easy to face. But having to always have the ‘good guy’ win and the ‘bad guy’ get punished (as the first statement above requires) limits some of the ways kids could gain new perspectives from books.

My first instinct when seeing this code was to laugh. So much of it seemed absurd.

As I stopped to think, however, I realized how many parents, teachers, and librarians still have similar codes driving their decisions when it comes to the books they provide to or allow kids to read.