This evening my youngest and I arrived home after several hours at the pool with friends and I scanned through the mail my husband had brought in. The first thing I saw was an envelope that had been returned to me. My first thought was surprise that a Christmas card was arriving this late. I know I tend to send holiday cards far after other folks do and it can take a while for those that can’t be delivered to be returned, but July still seemed excessive. I picked up the envelope and I felt as though I’d been hit. It wasn’t a Christmas card.

About two months ago my aunt, we call her GAB (great-aunt Betty – she was Aunt Betty when I was young but when my girls were born she became GAB), went on hospice. That is, of course, concerning. But GAB was on hospice a decade ago and things got bad enough that my sister and I flew to Texas one weekend to be with her. We spent the weekend reminiscing, laughing, and helping her decide what to do with all of her stuff (she had a lot of stuff as she loved to buy things – for herself and even more for others). The result of that hospice run was a move into independent living.

This time hospice didn’t go quite the same way. My mom, GAB’s younger sister, flew in. She knew immediately (she was a nurse for many years) that the end was near. She and their youngest sister were both there with GAB.

Aunt Betty, as she had been for the majority of my life, is the only one of my parents’ siblings to have never married (my mom has four siblings and my dad has three). We lived in Texas when I was young and Aunt Betty was a frequent part of our lives. She spoiled me and my younger sister. She took us to movies and amusement parks. When we moved to Virginia she sent random, fun gifts often. We adored her.

In more recent years we didn’t see her very often. Last year I decided I wanted to go and visit because I didn’t want to miss the chance to see her. I thought I’d take a long weekend, maybe meet my sister there. I was surprised when my daughters told me, quite fiercely, that they wanted to go too. They wanted time with GAB. They hadn’t spent nearly as much time with her as I have done, but they loved her greatly. We went at spring break and met my parents there. GAB tired easily so we spent some time with her but did lots of other things as well to give her a break. It was wonderful and it was hard. I am so glad we went.

Tonight, that card I found, was to GAB. For the past few years I wrote a card to her every month. Sometimes I sent pictures of my daughters. The reminder to write shows up on my to do list every month (as the reminder to send a postcard to Grumpy shows up weekly). I can’t bring myself to delete these reminders. The last card I sent her didn’t get to her quickly because she had moved from independent living into the nursing home area of the facility. The card was forwarded but didn’t get there before she was gone. Now, more than a month later, it has made its way back to me. It now joins all the other cards I’ve sent her as my mom collected those and returned them to me.

GAB’s death happened in the last few weeks of the school year and I was barely treading water for many reasons. I did not have the time to process her loss. We haven’t had any service or gathering to mark her passing. I haven’t seen my mother since then, and likely won’t for many months still. My sister and I had some time together and did talk about GAB.

But holding that envelope in my hand tonight really hurt. A lot. In the last year and a half we’ve lost three family members, from three different generations. Part of my pain is on behalf of my daughters, in their short lives they faced so much loss. (This may relate to how few people I lost in the first twenty years of my life.)

I love my nephew and miss him all the time. I love Grumpy and think of him frequently. I love GAB and feel a hole in my life with her loss. 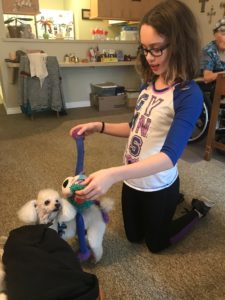 my youngest on our visit to GAB last year