This is my first Father’s Day without a grandfather. I am 45 years old so I do realize what a gift I was given. Interestingly enough, I never knew my maternal grandfather. He died when my mother was pregnant with me. I grew up surrounded by women. My mother had three sisters and one brother. My father has two sisters and one brother. My mother’s grandmother was around for much of my childhood as were both of my dad’s grandmothers and his step-grandmother. His grandfathers were as well. So there were men, but they were far outnumbered.

My grandfather was a petroleum engineer in west Texas and he had his own small plane to travel from oil rig site to oil rig site. He would also fly to Austin or Dallas (wherever we lived at the time) and pick up me (and later my younger sister as well) for a visit with them. I recognize that isn’t a common childhood memory! (He actually had two small planes. He crashed them both. After the second time I think my grandmother put her foot down and the plane was not replaced.)

My own daughters have many memories of visiting my grandparents, their great-grandparents, in the mountains of New Mexico where they retired years ago. Our oldest describes New Mexico as her happy place. The closest airport is an hour from my grandparents and the airports we might actually use (as they have more than four flights a day) are three hours away. And yet we’ve visited on an almost annual basis during my daughters’ lives. Our oldest’s first flight was to New Mexico for Christmas when she was four months old. (She was the first great-grandchild so it was a special holiday.) 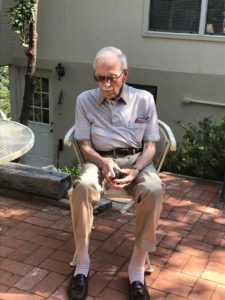 This picture was taken on our visit almost a year ago. My grandfather, Grumpy as we call him, is sitting on the patio he rebuilt just a few years ago. He was at least in his late 80s when he laid new sand and then bricks to rebuild this patio, my grandmother’s favorite place to sit. We (me, my daughters, my dad) helped some but he did the great majority of the work. And no one was surprised by that. 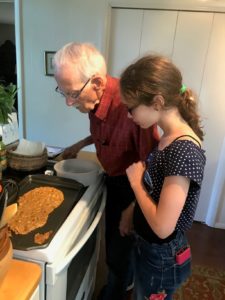 Last summer Grumpy taught my youngest how to make peanut brittle. He had perfected making peanut brittle at altitude (the town in which they live is at 6,920 feet) and in the microwave! 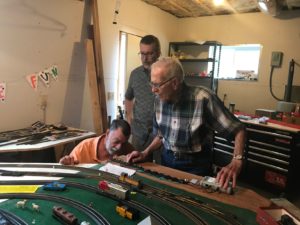 Here are the three generations of fathers in my life. Grumpy had an impressive train room in the last couple of years of his life and my dad (as well as my uncle) helped with it for the last year. When we visited my husband was enlisted to help solve some electrical challenges.

I am truly grateful for 45 years with my grandfather. I’m also greedy and I would have loved more years.