This morning two of my students brought me orchids for teacher appreciation week. (Little did they know I have special love for orchids because my dad always got my sister and me orchid corsages at Easter when we were kids. He picked them because we were Orr-kids.) I had some fun pens to give my kiddos this morning, just by chance as they arrived in the mail on Friday afternoon. As I gave them to my students one of the ones who brought me flowers said, “I thought it was teacher appreciation week!” 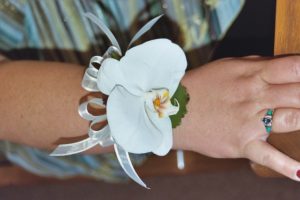 It was perfect as I’d already set myself a goal of writing about students I appreciate this week. There are so many students who have taught me so much and have made me a better teacher and a better person. So I’m planning to write a post each day reflecting on them.

I’m sure I’ve written about this one before but it bears repeating (if only because it’s good for me to reflect on this learning again and again). I don’t remember this girl’s name, but I taught her when she was in first grade, so this was at least 6 years ago, could be as many as 10 years ago. I honestly couldn’t say.

She was only in my class for the first couple of months of the year before her family moved. From the beginning she was a thorn in my side. She never followed directions. She didn’t care about the work we were doing. She was a challenge and I didn’t know what to do. Also, I was mostly annoyed more than focused on what to do.

About a month into the year, when things slowed down slightly, I spent an afternoon getting things organized. I came across the cards the kindergarten teachers had used when making classes for first grade. Each kid gets a pink or blue card (yup, that’s how we do it) with their name, ESOL level, special education label, advanced academic level, basic information about their behavior and academic performance, and a place for notes.

I looked at the card for this girl, the one who was making me cranky on a daily basis, and was shocked. Her kindergarten teacher, a teacher I greatly respect, had written brief notes about what a hard worker and how helpful she was. What?!?

I went to this kindergarten teacher and told her of my surprise. She was floored to hear me describe what I was seeing. She couldn’t believe it was the same girl any more than I could.

About a week later I noticed this girl was doing great. She was following directions. She was engaged in our learning. She was happy. (It was only then that I saw how unhappy she had been.) Not too much later she moved. Another teacher said to me, “It’s so sad she’s leaving now when she was really getting it.” I said, “It wasn’t her that was getting it, it was me.”

Talking to the kindergarten teacher, hearing her perspective on this student, completely shifted the way I approached her and responded to her. It wasn’t actually a conscious thing for me, but it happened. I could tell because of the change that resulted in the classroom. It was me that changed.

It was the clearest example of the classic quote from Haim Ginott that I have experienced in my years of teaching. (There have been other examples. This one just smacked me in the face.)

“I’ve come to a frightening conclusion that I am the decisive element in the classroom. It’s my personal approach that creates the climate. It’s my daily mood that makes the weather. As a teacher, I possess a tremendous power to make a child’s life miserable or joyous. I can be a tool of torture or an instrument of inspiration. I can humiliate or heal. In all situations, it is my response that decides whether a crisis will be escalated or de-escalated and a child humanized or dehumanized.”