Okay, more brilliance from the month of January! (I started writing these posts mostly as a way to collect these pieces that I wanted to remember and be able to return to. An added bonus, in my mind, was letting folks know how much I appreciated their writing. So far, so good!)

Starting off is a colleague in my district, Katie Eustis. We may be in the same district but I mostly know her on twitter. (That’s true surprisingly often, sadly.) She’s leading some great work in her area of the county (we’re an absurdly huge district so we’re broken into regions) that I am enjoying and learning from on twitter. Her participation in #ClearTheAir (a twitter hashtag that may be my #1 recommend these days) led to this piece.

As I’ve come to learn, you can’t uncouple systemic racism from teaching so here we are and here’s another post sharing my learning of historical facts that were absent from my education.

She continues with her learning from White Rage by Dr. Carol Anderson. It’s eye opening and a great introduction to the book, which is also worth the read. I often feel quite the connection with Katie as another white woman who is learning history and reality that is new to me. My frustration and anger at that fact are things I think Katie feels as well.

John Spencer has a piece about building empathy in students. His tips are good ones but his own personal stories are what really caught me. That personal connection or impetus to make change or take action is powerful.

When we design from a place of empathy, it has the power to change the world.

I appreciate that understanding as well.

If you’ve ever had the chance to hear Chris Lehmann speak you will read this piece and hear his voice. It is so very much him. He is arguing for the importance of doing the right thing, no matter the cost.

But it is also what the moment demands. Because it’s the truth. Because it is maybe the only step toward restoration and healing that any of those kids could actually do.

The piece is short but powerful.

This article from the Phi Delta Kappan probably should get its own blog post for me to reflect more deeply, but I don’t want to not share it so I’ll keep it in my Instapaper (thanks, Tim!) and hope I get back to it. I continue to be astounded by how unwilling some educators are to face the fact that racism is systemic in education.

An additional form of bias — poverty-disciplining belief — has received somewhat less attention from equity advocates, but it appears to be quite common in schools. Poverty-disciplining belief is the assumption that poverty itself is a kind of “culture,” characterized by dysfunctional behaviors that prevent success in school (Fergus, 2016). In effect, it pathologizes children who live (or whose parents lived) in low-income communities. And while it doesn’t focus on race per se, it is often used as a proxy for race and to justify racial disparities in disciplinary referrals, achievement, and enrollment in gifted, AP, and honors courses, as well as to justify harsh punishments for “disobedience” or “disorderly conduct” or “disrespect.”

This was one of those pieces I read multiple times because there is so much there to process.

Okay, as I get ready to write about this final piece I am realizing that, other than the Phi Delta Kappan piece by Eddie Fergus, this is actually the white people addition of the January readings. If you missed my January Readings, Part I, check it out for brilliance from many educators of color. Sigh. Note to self, keep a better eye on the readings you are doing. 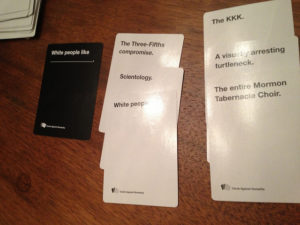 The final piece is from Peter Anderson and is about grading, a topic near but not dear to my heart. He writes about maintaining high expectations in a gradeless classroom. I think this is harder at the high school level because we have so deeply socialized kids around the idea of grades being critical to school by that point.

Grades aren’t going anywhere. They’re too baked into the system. There’s no way to move massive numbers of students up and down grades and in and out of different schools without some sort of standardized reporting. The inertia behind standard grade reporting feels insurmountable. Besides, there are more pressing issues to focus on such as educational inequity and structural racism. While grades can be understood as a manifestation of oppressive assessment systems, a focus on removing grades can easily miss the forest for the trees.

Peter’s writing is always interesting to me because it is clearly a way for him to work through his thinking. Being along for that process is fascinating.

As always, I am so grateful to these folks for sharing their thinking and for pushing mine.