Last night I had the opportunity to attend an author panel based on Ibi Zoboi‘s new book, Black Enough: Stories of Being Young & Black in America. Before the event last night I could not remember the title. I had down that it was a collection of short stories and that the other panelists (Jason Reynolds, Leah Henderson, and Renee Watson) had contributed to the book. But that wasn’t why I went. I went because I read American Street and loved it and then Pride and loved it. The chance to hear Ibi Zoboi was one I was unwilling to miss. Everything else was icing on the cake.

Given the opportunity to talk to her last night and to tell her how much her books meant to me I did a terrible job (as is so often true – I clearly need to rehearse what it is I want to say to authors whose books have been so important to me). American Street and Pride are in the top five books I have been recommending to people consistently since I read them. They are phenomenal works that are hard to put down and have so much to say.

I was looking forward to seeing Jason Reynolds and Renee Watson as well as Elizabeth Acevedo (who moderated the panel) but the thing that got me out on a weeknight during a super busy week was the chance to hear Ibi Zoboi. That’s just one more gift she has given me. Attending this panel last night was worth all the effort and loss of sleep it cost me (I need to be home and calm for some time before I’ll fall asleep – last night was rough). It would have been worth quite a bit more.

I haven’t been able to start reading the book yet as my daughter has confiscated it. She went with me because she has recently gotten in to Jason Reynold’s Track series and she was excited to see him. It didn’t take long into the panel, however, for her to be completely hooked. I wish all kids had the chance to hear authors talk about their work.

The highlights for me were plentiful. I’ll just share a couple however. The first was when a young person asked the panel how attached they became to their characters. Initial responses were strong as one said they have every intention of writing more about the character created for this short story. But the panel got passionate about their connection to and love of their characters in a way that felt so right. I looked at my daughter and we smiled at each other because we feel the same way about fictional characters. We can tell you the fictional characters we want to be best friends with or have as neighbors or the ones we have crushes on. When one author (this was going fast during the event and I’m afraid I’ll credit the wrong person if I name one) talked about shopping with a friend and pointing out an outfit she knew her character would look good in, I knew I was in love with these people.

At the very end a student from Galludet University asked about how one knows when to stop and what to cut when there is so much to write and say. Jason Reynolds kicked that off by disclosing the deep secret that all writers have editors (who deserve a lot more fame and fortune, I think) which was brilliant. As they were wrapping up the responses there was an awesome back and forth about whether or not one deletes the writing that doesn’t end up in the published product. Reynolds was out on his own on this and the conversation he had with the others on the panel was beautiful. (And it brought me great joy to catch a tweet from Ibi Zoboi about that today.)

The bookstore hosting this panel was packed last night. The chairs were full and bunches of folks were standing and sitting in every possible space. Many of those folks were young people. I can’t describe how wonderful it was to be there, listening to these authors, surrounded by others who love this. I am so grateful to have a bookstore like Politics and Prose (relatively) close who values such events and makes them happen.

I am also grateful to authors who take the time and emotional energy to speak to readers. My daughter (who will be twelve in a few days) walked away from last night on cloud nine from the chance to hear these authors talk about writing and reading. So did I. 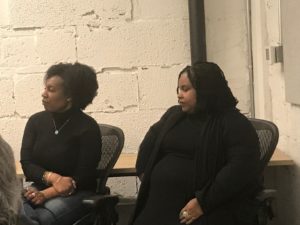 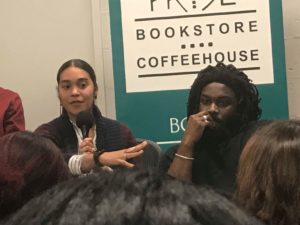 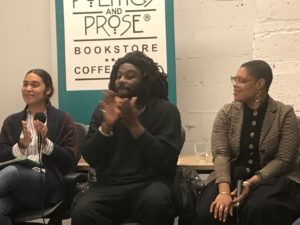 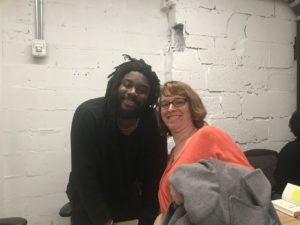