My new group of third graders will arrive on Tuesday morning (I got to meet most of them on Thursday). These pieces are ones that have really stood out for me as I’ve thought about the start of this new year. 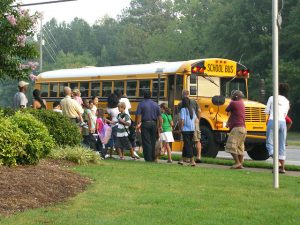 My entire teaching career has been in schools with many recent immigrant families. Pronouncing names is an ongoing challenge, but one that I am willing to fight every day.

When I was six, we moved to San Francisco, it was my first introduction to America.  We tried to have people pronounce it correctly, but no matter their attempts, it slowed them down, they had to think about it, it didn’t just roll off their tongues.  So it morphed into how it is pronounced now, Pur-neal, a mask I wear as an immigrated American.  A name that I respond to, but will never really fit.

At my current school I watch so many of my Latinx students adjust to their names being Americanized. The pronunciation losing the beauty of the Spanish sounds. I watch teachers only use the first of a child’s two last names. Pernille has reinforced for me the importance of getting a child’s name right, at least to the best of my ability. I also love that she included a video of her saying her name. I think I might ask my students to allow me to record them saying their names on the first day so that I can hear them as much as I need to without them having to say their name again and again for me.

For a couple of years now I’ve been a huge fan of Ross Greene’s work (since I discovered him far later than I should have). My former colleague and brilliant friend Ann-Bailey had the chance to hear him speak recently and her thoughts from that have given me an even better lens through which to view my kiddos (both my students and my daughters). She writes about lucky and unlucky kids, depending on how they communicate their challenges.

A statement from one speaker keeps repeating itself in my head. Ross Greene said “There are two types of kids. Lucky and unlucky. The lucky ones communicate that they are upset by speaking, whining, or crying. The unlucky ones communicate that they are having trouble meeting an expectation by hitting, running, spitting, or displaying other injurious behaviors. These kids are unlucky because they don’t illicit empathy, but the message they want to communicate is the same as those who are crying or whining. ‘I’m stuck. There are expectations I am having difficulty meeting.'”

She goes on to tell a story about her own two daughters and her reflection on it is powerful. Please, please, please go read this piece if you haven’t already. It’s a quick read but will stick with you.

Next up, a principal who took the time to really think about what he values and what his students and teachers need and how to make that happen. As one who firmly believes in classroom libraries (my daughters helped pack mine up back in June and multiple boxes were labeled “classroom library what else would it be” or “classroom library of course” or such) this warms my heart.

None of this research was a huge shock to the teachers in the room.  What happened next, however, was a huge shock.  I reached into my pocket and pulled out a stack of $100 gift cards to Barnes and Noble.  “We are spending the rest of the PD day at Barnes and Noble, and I have $100 for each of you to spend on your classroom library.”  They didn’t react at first, but just looked around the room at one another.  I could tell they were excited but were waiting for the catch.  I heard one teacher whisper to another, “Is he serious?”  Another teacher replied, “No, he’s kidding.”  I assured them I wasn’t kidding.  In fact, it wasn’t optional, we were leaving now.  I wanted to show them that I valued classroom libraries and was going to support them as they built their own.  We put money and time behind the things we value.  As the building principal, I greatly value classroom libraries and what better way to show it than by taking a field trip to the bookstore.  I handed the teachers their $100 gift cards (and another $5 gift card because you need a coffee while you browse) and we all headed to the bookstore.

Go read the whole thing to see how he made this happen and how he is continuing the work.

Along those same lines is a piece from Regie Routman, a list of five things to do to start the year off right.

Share the power; demonstrate inclusiveness even on the first day.

I love all five of her suggestions and the details around them (and there are far more details than I’ve included here), but this one is my favorite.

Finally, Shana Peeples was the National Teacher of the Year a few years ago and is now working on a doctorate at Harvard. Her piece is not about starting the year well with our students, but about how the messages teachers get at the start of the year (and other times, but in force right now) are damaging.

There’s tremendous pressure on teachers to be up and on, always positive, always “engaging.” When the issues students bring to school with them accumulate to a degree that they feel too heavy for many teachers, there’s not many places to turn.

She explores how these messages and the realities teachers face as human beings and as caregivers to young people are damaging teachers and our profession. It’s quite a piece and well worth the time (as it everything she writes).