Several years ago our oldest daughter (a cis-gendered, straight, middle-class, English speaking, white girl – about as mainstream as you are going to get, at least at first glance) received a new issue of American Girl magazine. On the cover was a smiling girl, as usual. This one was white and was wearing glasses and had braces. Our daughter, who was twelve or thirteen at the time, was out of her skin with excitement. This girl was like her. She felt a sense of acceptance and belonging in seeing that cover.

Back in June we saw Dear Evan Hansen, a musical about a young man who deals with significant anxiety. We walked out of that theater, all of us with tears on our faces, and our girl said, “That was the best two and a half hours of my entire life.” She, as one who lives with anxiety, felt represented and celebrated through this.

We all want to be seen, to be valued, to be accepted, to be loved. 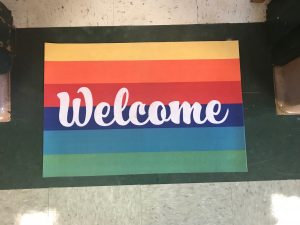 The doorway to my room (thanks to one of my wonderful teammates we all have these welcome mats).

Jess has written a brilliant piece about this. It will not hurt my feelings if you stop here to go read her piece, even if you don’t return. That’s fine. Her words are worth it. She got me thinking and I want to work through what she started for me, but if you only have time for one piece. Go now.

She begins by painting pictures of students (and families) who will feel left out, excluded, not valued, by our schools and us this year. The great majority of those experiences will not be intentional I believe. Schools and educators will be making choices they believe are inclusive and welcoming. But those choices will leave children and families (some of whom are a part of the LGBT community and others of whom are not but still lack a parent or don’t feel they belong) feeling they are outside of the norm, outside of the school community.

Jess continues by offering suggestions of small things we can all do to help ensure everyone feels welcome in our classrooms and our schools.

Try to avoid saying things like, “Only two boys and two girls at each table,” or, “Since a boy just had a turn, please pick a girl next,” or, “All the girls can go first and then the boys.”

Getting “girls and boys” out of my vocabulary in the classroom is about as tough a challenge for me as it was to stop saying “I like how you’re…” to my students. I managed that one so I think I’ll get there on “girls and boys” as well, but it is taking me longer than I’d like.

When sending home forms to be filled out, check the language that is used. Ask yourself, “Who might feel left out because of this form?” “Who will this form exclude?” “Who will this wording not work for?” And then make changes so that the language is as inclusive as possible.  Instead of leaving one space for “mother” and one space for “father”, try leaving an open space and asking families to list, “Family members or caregivers” and then asking them to specify each person’s relationship to the student.

Years ago I switched to writing letters to “Dear family” rather than “Dear parents” when it hit me that some of my students lived with grandparents or aunts and uncles or others. Jess’s questions are ones I will keep in mind as I send things home because I’m sure there are other ways I’m subtly sending families the message that they don’t fit.

Allow students to introduce themselves before you call their names from a list. Let students know that they should introduce themselves using the names that they want to be called in this classroom. Don’t worry too much about kids taking advantage of this. Sure, someone will try something silly, but it will be pretty obvious and it probably won’t last very long either.

Having taught students from other cultures for most of my career I’ve always asked students to introduce themselves. I want to hear them say their name before I try it in the hopes that I will get it right that way (which doesn’t always happen, sadly). I hadn’t considered that it offered children a chance to make this choice as well. As a kid I can remember going through being Jennifer, Jenny, Jenni, Jen, and who knows what else as I tried to figure out who I was. (For the record, I’ll answer happily to pretty much any variation on Jennifer so I guess I never quite pinned that one down.)

There are so many things I do to make our classroom as welcoming as possible for my students. However, most of those things are done based on what would be welcoming to me or what my daughters have said about what made them feel welcome in their classrooms. I appreciate Jess taking the time to help me see what I may be missing in helping ALL of my students feel welcome.