I spent Tuesday night and very early Wednesday morning depressed but, even more, worried about how to get through the day. First, I was dreading telling our daughters the election results. I sobbed talking with each of them. (On the plus side, the 9 year old is young enough to be disappointed and frustrated but not fully aware of possible ramifications and the 13 year old is immediately moved to actions on behalf of those with less privilege.)

School was also a concern for me. My 3rd graders had already been sharing concerns about Trump being elected because of his language about immigrants and people of color (my students all fit into at least one of those groups). I wanted to be open to their needs but not to add any stress if they weren’t feeling any. I had lesson plans that had been written prior to election day that we could use. I also began thinking about books to read, ideas for writing, and thoughts on how to allow my students to process their feelings and thoughts.

My students arrived and were immediately talking about the election. We ate breakfast without rushing (we often are rushing because our grade level is the first to go P.E., music, art, and such). Instead of cramming in our daily calendar lesson we gathered on the carpet in a circle after eating and I asked, “Is there anything you want to talk about as our day begins? Any questions or thoughts in your brain that you want to get out?” And I waited. If no one wanted to say anything that would have been just fine with me.

In fact, the first thing one student asked cracked me up. He said, “What’s in your shake?” (I make protein shakes for my breakfast and I drink them in the car on the way to work. On this day I couldn’t drink it so I took it in with me and drank it throughout the morning so the students had never seen this before.) I answered the question and then waited again. Another boy then said, “Donald Trump won the election.” Immediately voiced jumped in. About half the class was now talking. I stopped them and asked, “Who would like to talk about this?” All but about four kids raised their hands. “If your hand is raised, find a partner whose hand is raised and buddy up to talk. If you’re hand isn’t raised, you can find a partner whose hand isn’t raised and talk about something else if you want.” We went on to talk for the seven or eight minutes until we had to head to P.E.

When we returned to the classroom we had our morning meeting, greeting each other, playing a math game, and talking about how we’re all feeling in pretty general terms. One of the books I had decided upon before the kids arrived was Scaredy Squirrel. The book is funny and we needed to laugh but it also has some good things to discuss. So we read it. Then we started making a list of things that scare us. I started with ones from the book that also scare me, bees and poison ivy. Then I added heights because that’s a great fear of mine. The kids then shared some thoughts.

As, at the end of every writing focus lesson, I told the students they could continue writing like we had done or they could write about anything they wanted. Almost all of my students grabbed their writing notebooks and began lists of things that scare them. As I walked around I found that most of my students had Donald Trump on their list. We didn’t specifically talk about that, but I hope that writing it down helped ease some of the anxiety.

After writing and sharing with a partner, we read Extra Yarn. I choose this book because it’s about someone doing something kind for others. It’s not an in-your-face story and there’s a lot of surprising twists in the story. We had some good conversation throughout the book about the main character and the ending.

After lunch and recess we spent some time reading independently. It’s always good to have some quiet time lost in books.

To wrap up our day we watched the final few minutes of Martin Luther King, Jr.’s I Have a Dream speech. Then we wrote about and drew our dreams. Here are a few: 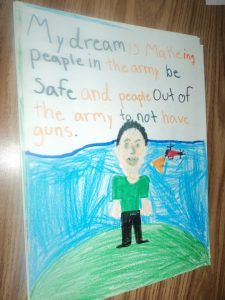 My dream is making people in the army be safe and people out of the army to not have guns. 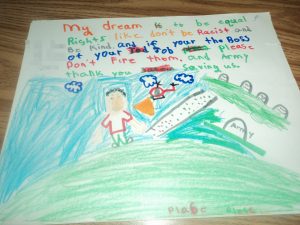 My dream is to be equal rights like don’t be racist and be kind and if you’re the boss of your job please don’t fire them and army thank you for saving us. 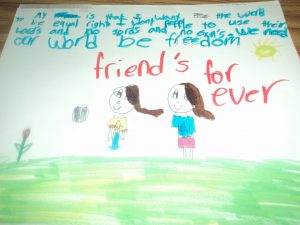 My dream is that I want the world to be equal rights. I want people to use their words and no swords and no guns. We need our world be freedom. 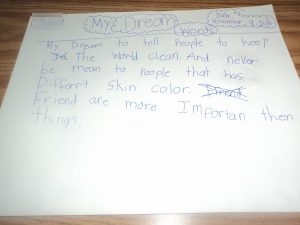 My dream is to tell people to keep the world clean. And never be mean to people that have different skin color. Friends are more important than things. 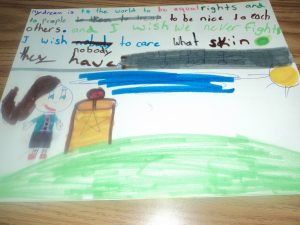 My dream is to the world to be equal rights and to people to be nice to each other. And I wish we never fight. I wish nobody to care what skin they have. 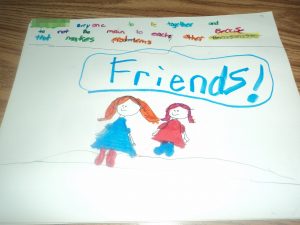 Everyone to be together and to not be mean to each other because that makes problems.

These are their words, their ideas, their hopes and dreams. That gives me hope.