I’m gone from Manchester, NH, away from the seven others in my group, no longer in the presence of Carla Rinaldi or Edith Ackerman or Cynthia Solomon. A part of me feels the way our space felt after we had dismantled our water show. Empty. Sad. 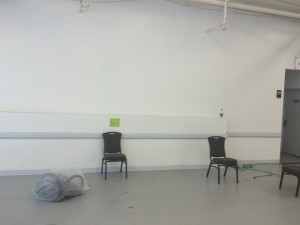 Another part of me is still flying around full of ideas and questions and thoughts I need to process. In fact, so many that I have had trouble getting started. I’m sure Gary and Sylvia wouldn’t approve, but I tend to think of CMK as two parts. There’s the project work, done either alone or with a group. And there’s the guest speakers and educational experts who are at CMK. I’ve written a little about both already but I’ve only skimmed the surface. I say Gary and Sylvia wouldn’t approve because those two parts are intertwined. They aren’t separate things. CMK is far too well designed for that.

In spite of that, right now I’m focused on the project work from the week. Eight of us, none of whom knew each other (I’m fairly certain) before we arrived in Manchester, spent four days together creating a water show. It ended up being a bit Rube Goldberg-ish which just made it even better in my mind. 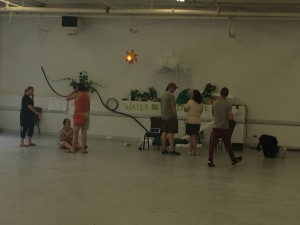 We actually began as two separate groups who joined forces. I was in the water show group and we joined a group who was trying to create an interactive something with music and lights. I could not have liked or had more fun with my group members if I’d tried.

On our first day together we actually worked to create a plan for our project. The plan you see here came near the end of the first day after we’d talked for quite a long time, made lists of ideas and questions, and changed our minds again and again. All with lots of joy and laughter as we threw out ideas. Most of our ideas sounded ridiculous to me. I thought there was no way we could create this. 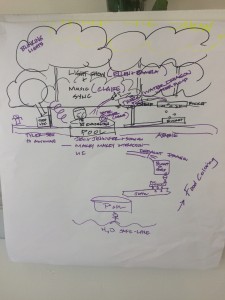 As the days went on, we worked alone or with others, conversations continued and things evolved, we walked away from ideas and threw things away. We collaborated in so many different ways. And even when it was hard or challenging or frustrating, it was still fun.

One of the things Carla Rinaldi said multiple times was about the importance of learning as a part of a group and learning as a group. I’m still working on understanding that idea. (This is why I think Gary and Sylvia would disagree with the idea that CMK is two parts. My thinking about one part is influenced by the other. As I said, they are intertwined.)

What did I/we learn as a group? I’m not certain. What does it mean to learn ‘as a group’ rather than ‘as a part of a group’? I think of learning as an individual thing (not that it happens in isolation but that it happens within one). This is an idea that will require some ongoing thought and reflection.